Student-run SUTV at Shippensburg University is a nominee for an Emmy® Award for its newscast. It is thought to be the first Emmy nomination for the group.

The nominee list was announced recently by the Mid-Atlantic Chapter of the National Academy of Television Arts and Sciences (NATAS). The academy, according to its website, is dedicated to the advancement of the arts and sciences of television and the promotion of creative leadership for artistic, educational and technical achievements within the television industry. It recognizes excellence in television with the coveted Emmy® Award for news, sports, programming, public service and technology.

“I’ve been flying well above cloud nine since the nomination announcement,” said Brandon “Bubba” Smith, SUTV general manager. “It’s beyond rewarding to be recognized on a regional scale for something we’re extremely passionate about. I’m proud of our news team, thankful for all those who have supported us and continue to support us, and eager for September.”

SUTV was nominated in the College Production — Newscast category. Also nominated in that category was Temple University. According to the NATAS website, this category is for outstanding achievement in a regularly scheduled newscast with entries to be judged on such areas as overall content, presentation, enterprise, writing and format.

The program entered was broadcast March 31. According to the program description: “SUTV’s Bubba Smith reports from Harrisburg on students’ rally protesting the governor’s proposed education cuts, an SUTV News/The Slate Newspaper exclusive with President William Ruud about the imminent tuition increases, Lucas Martin reports from the bus taking students to the rally in Harrisburg, and Rachel Snody explains how Facebook was a valuable resource in organizing the rally.

Also, Casey Piell’s forecast, Steph Horvat reports on professor’s involvement with Peace Corps and the stories they share, Mariana Boguski’s and Jim Gallagher’s sports, how fake $10 bills have been found around town, and Anna Kerstetter takes us behind the scenes of Shippensburg’s latest theatrical production.

According to SUTV News Director Barbara Schindo, “SUTV is so fortunate to have the involvement of many ambitious and hard working students. I am so proud to be a part of a team that strives to do the best we can and put out a high quality, informative show each week for our campus and community. Being nominated for an Emmy is exciting and overwhelming. I can’t wait for September.”

Kyle Rogers, SUTV leads anchor, added “I’m ecstatic to be nominated for such a prestigious award from such a powerful institution within television. It’s an incredible feeling knowing our hard work here at Shippensburg University is being recognized among those in the industry we strive to be. I’m honored to represent Ship at the awards ceremony in Philadelphia among some of television’s finest…and hopefully come back with a new friend we can call Emmy.”

The award recipients will be announced on September 17 in Philadelphia. 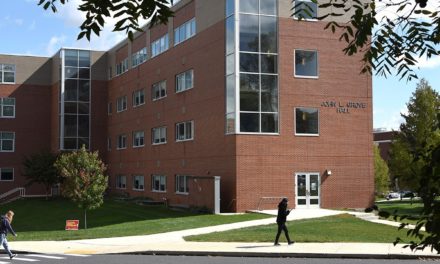