SUTV was a winner in the sports – live event category for “Mansfield at Shippensburg Men’s Basketball.” The following students were recognized for the award:

Marshall Keely was victorious in the arts and entertainment/cultural affairs category as a producer/reporter for “Brass Camp.”

Paige Arensmeyer was also nominated for SUTV in the long form category. She was a producer/reporter for “Life in Gros Mangles.”

The student media organization saw wins in the previous two years as well. Marina Barnett ‘17 was a winner in 2017 for her public affairs/community service story “Seeing Eye Dogs.” Holly Harrar ‘16 was a winner in 2016 for a story in the same category, “Inclusion in Action: GMU Life.”

Two alumni, Amanda Peterson ’12 and Joe O’Neill ‘05, were nominated for regional Emmy® awards. Peterson, a traffic anchor for abc27 News, was part of a team nominated for outstanding morning newscast in a medium market. O’Neill, Director of Visual Media at Dickinson College, was nominated in the public/current/community affairs feature/segment category.

The 2018 Mid-Atlantic Regional Emmy® Awards were held on Saturday, October 13 at the Philadelphia Marriott.

Message from the AVP of Operations: Preparing for the return to a face-to-face Fall semester 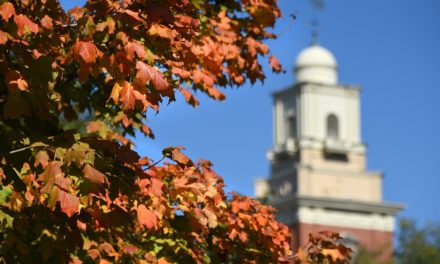