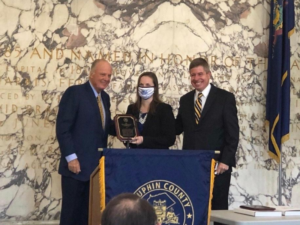 Varley earned dual undergraduate degrees in chemistry and exercise science in 2013, as well as a master of business administration degree in 2015 from Shippensburg University. While at Ship, Varley was a member of the Women’s Basketball team.

Varley then completed her law degree at Dickinson Law where she was named “Law Student of the Year” for the Northeast region by The National Jurist. Varley was one of 20 student lawyers recognized nationally in 2018 and the only law student from Pennsylvania.