Peyton Bramble Interns with Caring for Textiles in Washington DC 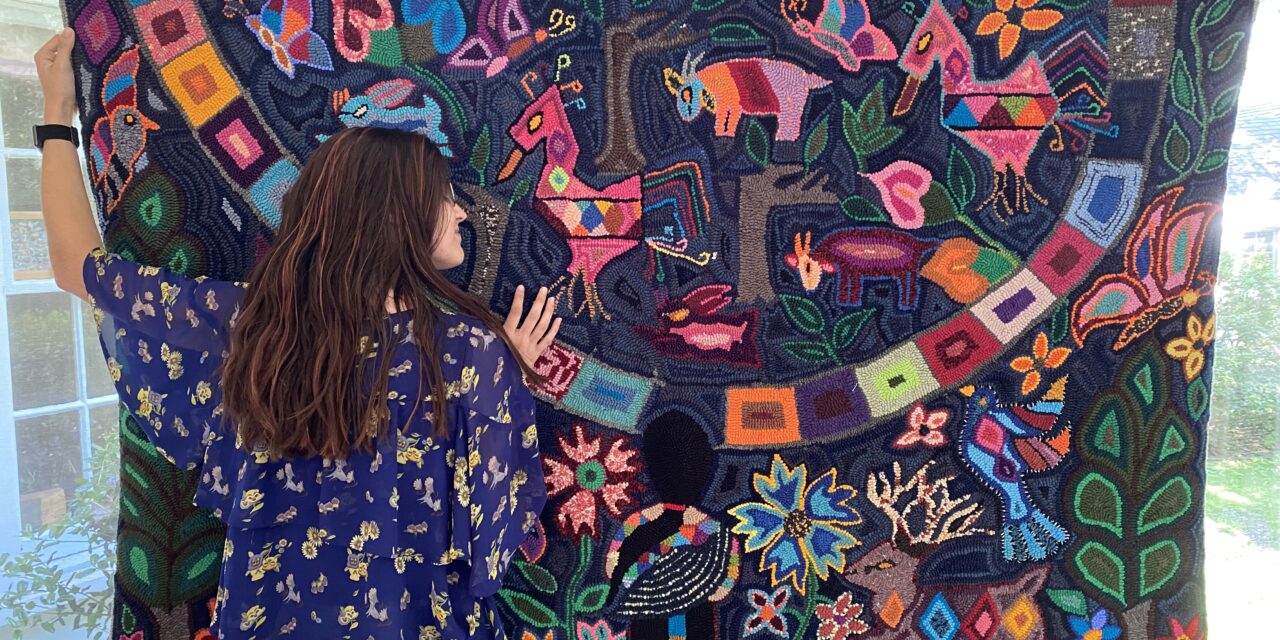 Hello, my name is Peyton Bramble, and I am a graduate student in the history department’s 4+1 program. I am also the graduate assistant for the SU Foundation. This past spring, I graduated with my BA in History with a concentration in public history and a minor in technical and professional communications.

This summer, I moved to the Washington DC area, where I interned with an independent contractor called Caring for Textiles. Caring for Textiles is a small team dedicated to the conserving of historic textiles for both private clients and larger organizations. This summer I got to work with people at the US Embassy in Guatemala, the Heinz History Center in Pittsburgh, and various small mu

seums. Within those projects, I had the opportunity to work on some incredible textiles that ranged from Guatemalan hooked rugs that featured traditional designs found on their huipils to a war of 1812 uniform that means a lot to a small town in Virginia called Fulvanna.

My big project for this summer was to complete the conservation beginning to end of two Chinese silk banners that dated to the 18th century. They are likely from the Qing dynasty and are incredibly rare seeing as they also likely hung in a temple. The only familial insight we have is that the client’s grandfather acquired them while he was overseas in China during WWII. The client’s grandfather had an affinity for Asian textiles, but beyond that not much else is known. 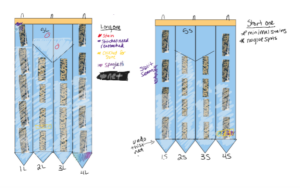 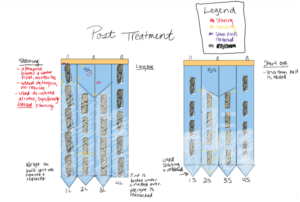 Here are the two diagrams I made to be my blueprint for this project. The first one is the one I initially created and then the second one is where the banners stood when I finished my treatment. It’s a good comparison of what we initially planned, and then what the textile told us as we went needed to happen.

The banners both had severe loss to their wefts, the vertical threads of a weave, leaving many of the warps (the horizontal threads of a weave) both exposed and vulnerable. This created a unique situation in terms of conserving these banners because we had to encapsulate the loose threads in netting, but we could not stitch into the actual brocade, so we had to take the netting all the way around to stitch it to the intact silk damask that lined the back. This got tricky because I had to make sure there was enough tension so that the net would not bubble after it was stitched down.

Aside from netting the sections I also had to give some extra support to the extra vulnerable areas by doing laid couching, a stitching technique that is often used in conservation to hold down long threads. By using this technique, we made sure that under the net some particularly bad areas would not shift and make themselves worse. We also used it on areas that we were not going to be netting so that they were held in place invisibly. Below is an example of an area I couched on the second panel of the short banner.

This project was such a challenge and so much fun. Getting to work with the client to pick out the back

ing fabric that these will be mounted on was a unique experience, and though I won’t be there for the mounting process it was still fun to get a hint at what they will look like after I leave.

This project was very fun and one that inspired me further than the conservation treatment. These three rugs were purchased by the US Embassy in Guatemala as part of the Art in Embassies program. These rugs are handmade by a collective of indigenous women in Guatemala and feature designs that are very traditional to their culture. This art medium adapted to their lifestyles and gave these women economic agency and a support system.

As far as treatment went, these banners were rather simple. They needed to be adapted to be able to be safely hung semi-permanently. This process involved sewing hook and loop Velcro that is attached to twill tape to the back of the rugs. They will then be paired with a one inch by three-inch wooden slat that will attach to the wall in order for them to hang. This is done because hand-sewing through Velcro is incredibly difficult so by sewing through the twill tape is much easier. We also decided to attach sleeves to the bottoms that we could put a smaller slat through. This would stiffen and straighten the bottom half of the textile to allow it to hang nicer. I measured and cut black fabric that would turn into the sleeves. After machine stitching the sleeves, I hand sewed them to the textile along the bottom.

The last project I would like to highlight is a gorgeous Yemeni dress that is embroidered with silver metal thread. It was a little complicated because I had to recoil the threads back into its original shapes and tac them down and it was actually very fun and frustrating at the same time. It was like trying to stitch down wire to an extent. It definitely still had some memory to it so it was definitely fun to try and figure out how it was supposed to coil. My hands for sure smelled like money after but having to rework all that was a good challenge. To me, each textile is a puzzle, and it is our job as conservators to put its pieces back together and create the picture to the best of our ability.

Being an independent contractor, Caring for Textiles receives a lot of different kinds of contracts. We get private clients attempting to reconcile with their own past through the means of an important piece of family history, and we also get some major organizations. Here are some of the client highlights from this summer!

We had a woman who was the former president of their historical society come in from Fulvanna, VA with a war of 1812 uniform for General John Hartwell Cocke, a Fulvanna native. The client brought us a jacket from 1812, a beaver skin hat with an ostritch feather, and some epaulettes that had all belonged to the general. Along with the pieces she brought us books about Fulvanna, the pieces themselves, and their museum. She was such a delight to have in the studio and she was incredibly kind. I have always loved people from local historical societies because they are so passionate about the history that they have, most of the time voluntarily, sunk themselves into.

We had a client come into the studio from Emmitsburg, PA with some relics from Saint Seton, the Catholic saint. He works at the shrine where they are housed and was asking for an invoice for what it would entail to treat and display these relics. We were presented with a shawl, a bonnet, and a christening dress that may or may not have been worn by Elizabeth’s daughter. They know it was for sure used to christen orphans in a catholic orphanage in New York, but it is only through story that it belonged to the saint, but it is highly possible. Having some knowledge about the Catholic faith and the way it venerates saints made this experience very cool. It truly br

eathes a new life into these pieces when you combine it not only with history, but with culture. It was very exciting learning about Elizabeth Seton and the story that came with the artifacts on the table.

While I was with Caring for Textiles, we went on a few fun field trips that were both for work and for fun. When their client lists are so long you find that pieces that they worked on are in many museums not limited to DC.

Pittsburgh This is the field trip that kicked my internship off, we had gone to Pittsburgh to do a treatment and evaluation of a few pieces that Heinz will want conserved and able to be displayed in the future. It was a whirlwind of a week but it did get to mean that I worked across from the set of Mister Rogers Neighborhood for a week which was well worth it.

Renwick Gallery We visited the current exhibition at the Renwick Gallery toward the end of my internship. One to see the show in completion but two to see how they decided to hang the pieces that Caring for Textiles had p

repared to hang. I always love going to the Renwick because their collection of textiles in incredible and they always display them wonderfully. I never fail to find something that really captures my attention and makes me want to go home and learn a new craft on a whim.

Hillwood Estate, Museum and Gardens On one of the last days of my internship we went on a trip to Hillwood Estate to do an evaluation of a few pieces that they would like to display in the future. There was an incredible Russian costume, a few beaded 1920s gowns, and one tulle dress that is not doing well and will require a lot of work. But of course, we could not leave without paying a visit to Grace of Monaco: Princess in Dior. Before I began my internship the Caring for Textiles team installed the Grace Kelly Exhibit at Hillwood so it was absolutely necessary to go pay it a visit. 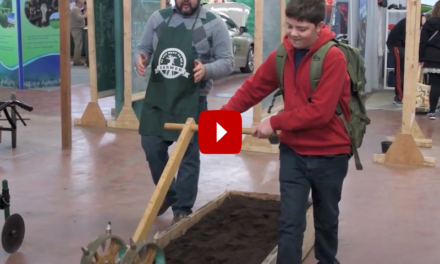 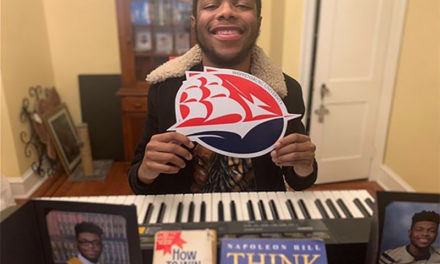 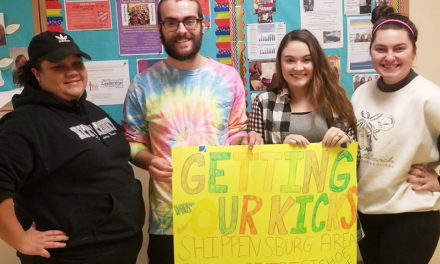