Members of Shippensburg University’s campus television and radio stations have earned recognition of their peers and media professionals.

On Saturday (Sept. 22), members of student-run SUTV received an Emmy® award in the College Production-Sports Category for a story produced by Brandon “Bubba” Smith. The story, “Red Raider Goes For Gold,” highlighted Shippensburg alumna Neely Spence’s goal to compete in the Summer Olympics. Smith graduated from Shippensburg last May and was general manager of SUTV for two years.

According to Dr. Kim Garris, associate professor of communication/journalism and SUTV advisor, “He played a vital role in raising the bar and I am so pleased that he was rewarded this way individually. The award also speaks highly to the entire SUTV crew, as none of the productions is produced alone. It takes an entire team to make it happen.”

SUTV also received an Emmy® nomination in the College Student Production-Long Form: Fiction/Non-Fiction category for the program “Hidden Barriers,” a 30-minute segment that looked into diversity on campus.

Of 40 college entries this year, only 14 received nominations, and Shippensburg garnered two. This is the second year members of SUTV were nominated by the Mid-Atlantic Chapter of the National Academy of Television Arts & Sciences.

“We have worked extremely hard over the last few years to raise the quality of our content to that which is comparable to professional work. We are so delighted that the professionals agree,” Garris said.

Members of WSYC, the student-run radio station, also were notified they are nominated for a College Radio Award with four other college stations in the category of “Best Use of Limited Resources.

According to Dr. Dr. Ted Carlin, professor of communication/journalism and WSYC advisor, “This is another national piece of recognition for student media and all of their hard work, and special kudos to WSYC general manager Brenden Bekos and program and music director Jessica Thumma for leading the efforts over the last 18 months.”

The winners will be announced during the College Music Journal Music Marathon Oct. 18 in New York City.

A message from the President: Holiday card photo invitation 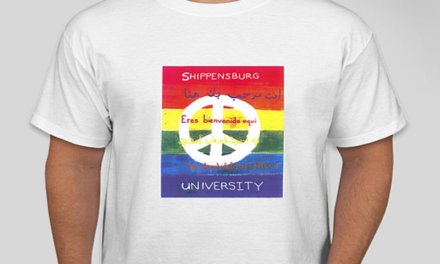