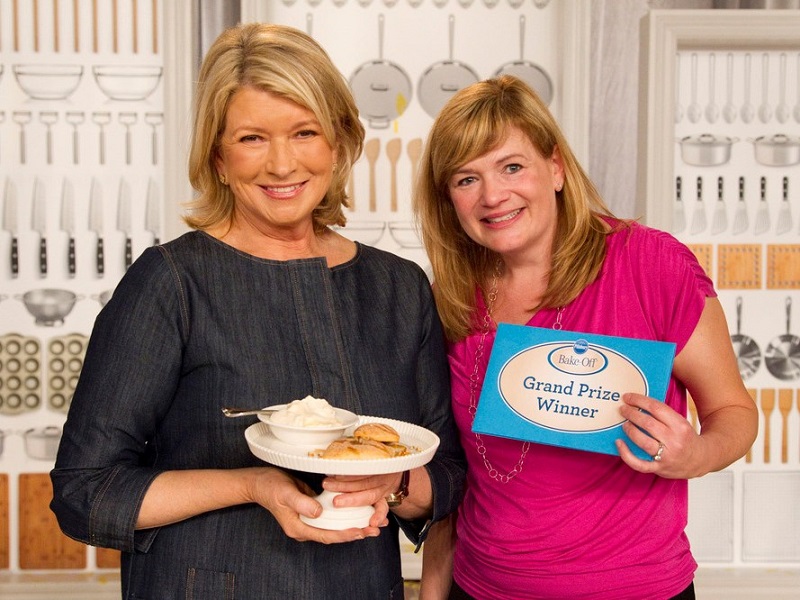 Bake a Ship-inspired patriotic treat this summer with our own award-winning alumna, Tina Verrelli ’90!

The Pillsbury’s Annual Bake-Off champion has whipped up a fresh dessert for her fellow Ship friends, and she’ll host a virtual bake-along June 18. Verrelli will take us step-by-step through a very Shippy Berry Sheet Cake that is perfectly red, white and blue for Ship happy hours or July 4. 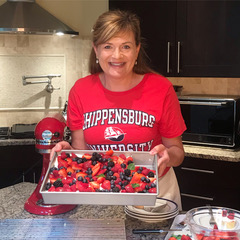 “It’s a perfect summer make-and-take cake! I tried several different cakes for the base—sponge cake and pound cake. Rich pound cake won for being sturdy enough to handle all the berries on top. You can bake and serve the cake right in your favorite 9 x 13-inch pan. The whipped cream is stabilized with some instant pudding. It’s a great trick for being able to make your whipped cream in advance,” she said.

“Some strawberry jam spread between the cake and the whipped cream frosting adds extra berry flavor and provides a barrier to help keep the cake from getting soggy. I love the ratio of rich pound cake to the not-too-sweet fluffy whipped cream—it’s about half and half! With the stabilized whipped cream, you can make this cake a day in advance which is great during the busy days of summer.”

Stay tuned to the Alumni Association Facebook for a link for the June 18 virtual event or be sure to update your contact information with the association to receive a link via email.

“Surreal” is the way Verrelli aptly describes sharing a table with Martha Stewart at a press conference. When she entered the Pillsbury’s Annual Bake-Off  in Orlando in 2012, she never expected her passion for food would lead to mingling with Martha and Bobby Flay, a millionaire status, or a career cooking on QVC as a KitchenAid representative.

“I brought my family with me [to the Pillsbury contest] to make a vacation out of it. I didn’t plan on winning. We were planning on going to Universal and Harry Potter World. ” (The family did eventually make it to Universal Studios where they indulged in an unusual amount of souvenirs after winning, “just this one time”, according to Verrelli.)

Despite being only her second contest ever, Verrelli’s original recipe, Pumpkin Ravioli with Salted Caramel Whipped Cream, was named Pillsbury’s 2012 Grand Prize Winner on The Martha Stewart Show. “I thought maybe pumpkin would work against me with the contest being held in the spring and not the fall”, Verrelli noted, but the power of pumpkin is strong.

After the contest, Pillsbury invited the whole Verrelli family to their General Mills headquarters in Minneapolis. She shot videos on site and was honored to find her recipe served to all staff in the corporate café.

Food presents the unique opportunity for Verrelli to share pieces of her personality and creativity with others and led her to create a recipe blog, Epicuricloud, in 2013. “It was at the start of when clouds were starting as storage devices, and epicuri is Latin for someone who is passionate about food and drink, so it made sense to call it that.”

Verrelli’s seemingly bottomless creativity has fueled her content the last seven years, ‘I have a never-ending bucket list of things I want to make. Some things I’ve never made, and some staples I want to go back and perfect, like the perfect pancake… a lot I create as needed, when I can’t find the recipe I’m looking for.”

The same year in 2013, Verrelli found herself spending the Christmas holiday in Chelsea, NYC, competing on Food Network’s Americas Best Cook, her highest stress competition to date. The cameras didn’t faze her. “You don’t even really think about them, because you are so focused on what you have to do.” The high pressure and post-production editing process, however, made her apprehensive. “You are nervous because you don’t know how you are going to be portrayed. They don’t tell you a lot when you sign on because they really want [that element of] surprise.”

Often viewers from home wonder how much information contestants get before going on to large nationally televised competitions. Do they show them any techniques or give any clues? Do they stage the drama?

Verrelli said you go in blind, but you hang on the word of every employee around and can catch hints. “Someone said you could be making duck, risotto, pig’s ear, fresh scallops out of the shell, or filleting a whole fish.”

Following the show, you know there are some standards to expect. “We figured we would have to make a burger, a breakfast, a dessert.” However, contestants receive zero assistance with training or technique. That particular evening of multi-week competition, Verrelli went to Chelsea market near the Food Network building and picked up fresh, whole fish. They didn’t have scallops, so she compromised with oysters in the shell.

“So at night in the hotel, I’m googling how to filet a fish, which I’ve never done before. I picked up oysters and an oyster knife and a kitchen towel, I sat in this tiny little shower in this hotel room in Chelsea and taught myself how to shuck oysters and filet fish so at least I knew how to do that.”

Verrelli indicated the stress, physical demands, and the feeling of that clock clicking down is true to what happens on set. “We were shooting 18-hour days and were exhausted. Plus, you aren’t sleeping because you are nervous. I pulled a muscle running to the pantry at the start of the show; camera cables and wires created an obstacle course trying to get to an ice cream maker before another contestant.”

Verrelli says she didn’t get a lot of time to bond with Martha Stewart or Bobby Flay (they’re busy folks), but she did spend lots of time with her mentor on America’s Best Cook, Chef Alex Guarnaschelli. She is warm and friendly on screen, but Verrelli also notes that she is extremely competitive and passionate.

“I’m not die-hard competitive, so I felt a little meek next to her bold [personality]…she was quite a presence and strong woman. I listened and did everything she said.”

Verrelli made it to the end of the competition, where she came in honorably as runner-up.

She continues to bake and cook competitively, although she does not consider herself a competitive person in the traditional sense. “Competition was very sports related growing up (in PA). I don’t have much athleticism, but I felt confident in my expertise cooking and baking, so I felt more positive about that type of competition. In the era I grew up in, cooking wasn’t a trend then… I read cooking magazines and watched PBS cooking shows…Watching the Food Network now, it’s a different world with more opportunities for chefs.” Read more on Verrelli’s experiences with cooking contests here.

Verrelli continues to enter competitions because she feels it’s important to do things outside of your comfort zone that allow you to grow. That growth is just the thing that provides opportunities like a career baking and demoing KitchenAid products on QVC.

When not in quarantine, Verrelli, who currently lives in Devon, Pennsylvania, typically records episodes at QVC studios in West Chester. “When you are in a show, you usually go an hour or two before the show starts, meet with the host, and go over all the stuff you need to have prepped for the demo. Usually I’m there Wednesday night and Sunday afternoon.”

While COVID keeps us all home, Verrelli creates demos from her phone for now, which she trims down to one minute to air on QVC. “If you are today’s special value, or featured product, you do one-hour shows all day, and it becomes a bit like a marathon over skype.”

She posts all the recipes from QVC to her blog as she gets so many questions and comments for them when on air. “It’s a total thrill when someone makes my food.”

Things have come full circle for Verrelli who reflects on her experiences at Shippensburg University as being the perfect stepping stone for her current work. As an elementary education major at Ship, Verrelli learned stage presence, time management, logistical and lesson planning, which all translate perfectly to baking live on TV. “It’s a neat combination of teaching and my passion for food, because I feel that when I demonstrate the KitchenAid appliances, I’m essentially teaching how to use them.”  You also learn how to be creative and make do when you are a student in college, she said. “I remember boneless, skinless chicken breast being so hard to find. You had to improvise.”

Besides her career, the friendships are one of her fondest memories, “I remember meeting so many friends [at Ship], and am still friends today with one of my roommates who lives on my street. Her husband is also an alumnus, and we walk almost daily together.”

Verrelli’s eldest daughter is slated to begin college this fall, and she shares the same advice with new Ship students that she gives to her daughter. “No matter what major you pick, it’s just a starting point. You never know where you will end up or how you will use the skills you have learned.”

As for the Class of 2020, Ship’s newest members of the alumni family, Verrelli said to try to believe there is a purpose behind the chaos of COVID. “This whole experience is going to teach us something, and we will all be changed in some way. It might not show till much later down the road. Perhaps this will influence your career path. This situation has its silver linings. It makes you respect people at the grocery store. It’s a reset. We are cooking, people are baking bread who never have before, we are spending time at home with our families. It’s a chance to re-prioritize.” 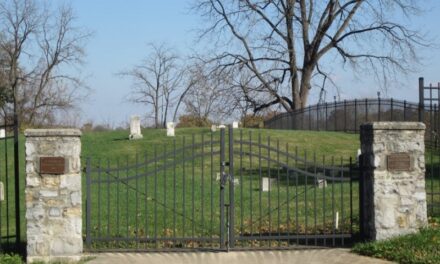 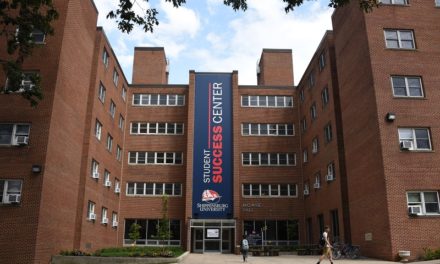 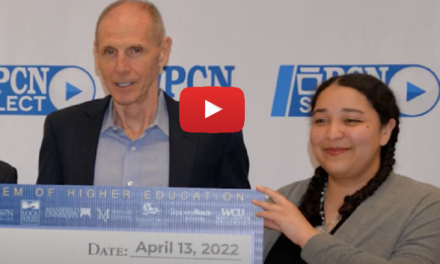