Dr. Lonce Sandy-Bailey, assistant professor of political science at Shippensburg University, is the second faculty recipient of a Fulbright award for the 2014-15 academic year.

Sandy-Bailey received a Fulbright Specialist grant to travel to Ovidius University in Romania in October. During the two weeks he is there, he will speak to several classes and work with faculty on program evaluations.

In addition, he will serve as a plenary speaker and participate in sessions at the annual meeting of the Romanian Association of American Studies, whose theme this year is “(Im)Migration Patterns: Displacement and Relocation in Contemporary America.” His speech will focus on immigrants, democracy and political change in the United States. “I also will give several talks in the community, including at the American Corner in Constanta, where Ovidius University is located,” he said.

According to the U.S. Department of State, “American Corners” are in more than 400 cities around the world where American embassies and local institutions have partnered to create small libraries that house information about the United States. Every year, several million people visit American Corners, accessing books and databases and attending talks, films, workshops and classes.

Sandy-Bailey’s lectures will focus on the development of America’s political parties; presidential elections, including the “invisible primary,” the period of time between when someone announces his or her candidacy for office and when primary elections actually are held; and general aspects of the U.S. democracy.

For the last several years, Sandy-Bailey has served as academic director for the Institute on U.S. Political Thought, hosted for six weeks each summer by the University of Massachusetts, Amherst. Also a Fulbright program, the institute welcomes scholars from other countries to study American political thought from the colonial period to the present.

“One of the goals of all the Fulbright programs is to build connections between faculty and universities here and around the world. I have enjoyed my work with the institute, and I am looking forward to the opportunity to work with faculty and others in Romania.”

Sandy-Bailey is co-author of two books being published this fall, The Democratic Party: Documents Decoded and The Republican Party: Documents Decoded, which assess speeches and other historical documents to show how the two parties have evolved since their founding. A book he is co-editing, In Defense of the Founders Republic: Critics of Direct Democracy in the Progressive Era, is due out next spring. “I find the study of democracy incredibly interesting. And to understand our democracy better, I think we need to better understand democracies abroad as well.”

The program was established in 1946 under legislation introduced by the late Sen. J. William Fulbright of Arkansas. Sponsored by the Department of State’s Bureau of Educational and Cultural Affairs, it operates in more than 155 countries. Approximately 325,400 people have participated since its inception.

Earlier this year, it was announced that Dr. Kurt Kraus, professor and chair of the Department of Counseling and College Student Personnel, earned a Fulbright U.S. Scholar grant to travel to the Kingdom of Bhutan to teach at the Royal University of Bhutan and consult with the Royal Ministries of Education and Health.

Ethan Goldbach of Greencastle received a Fulbright English Teaching Assistant Program grant, and will spend 10 months in Malaysia next year as a teaching assistant. Goldbach was a dual major in history and international studies who earned his bachelor’s degree in August. 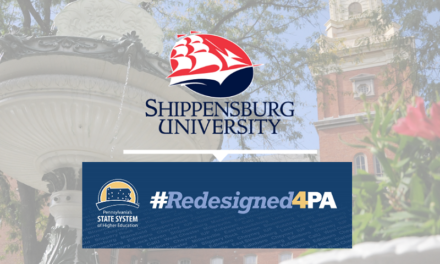 Show your support for the Shippensburg Community Resource Coalition