The Board of Governors of Pennsylvania’s State System of Higher Education has selected Dr. George F. “Jody” Harpster Jr. ’74M as the 16thpresident of Shippensburg University of Pennsylvania. The State System made the announcement today (Jan. 22) and released the following information:

Board of Governors selects interim leader for permanent position

The Board of Governors of Pennsylvania’s State System of Higher Education today selected Dr. George F. “Jody” Harpster as the next president of Shippensburg University of Pennsylvania. Dr. Harpster has served as the university’s interim president since May 2013.

He previously was the university’s executive vice president for external affairs and government relations and also held the position of interim president from June 2005 to February 2007. He came to Shippensburg in 1995 as vice president for student affairs after having earlier earned a master’s degree there.

“Dr. Harpster’s long, successful history at Shippensburg makes him the ideal choice to continue to lead the university into the future,” said Board of Governors Chair Guido M. Pichini. “He is dedicated to the university and to its students, and to ensuring that both succeed.”

Dr. Harpster has been instrumental in the university’s academic growth, including the introduction of a series of engineering programs in recent years, all of which were developed in cooperation with business and industry in the region. Among them is the first electrical engineering degree program that will be offered within the State System beginning in the fall. The university currently offers degrees in both computer engineering and software engineering.

“It took forward-thinking leadership to develop these programs,” said State System Chancellor Frank T. Brogan. “Dr. Harpster has demonstrated that kind of leadership in every one of the important roles he has held at Shippensburg over the last two decades. I look forward to continuing to work with him on behalf of the university and the State System.”

Dr. Harpster said he also looks forward to continuing to lead Shippensburg University as its president.

“I am honored and humbled to have been selected as the next president of Shippensburg University,” he said. “As an alumnus and long-time member of the Ship family, I’m proud to serve this institution whose traditions of academic excellence and strong commitment to its students span 144 years. Thank you to all those involved in the selection process for your time and effort and for your confidence in my ability to lead.”

The Board’s action today comes at the conclusion of a national search, which included more than 80 candidates.

“Jody Harpster’s academic credentials and administrative experience, together with his many years of dedication to Shippensburg University and his deep roots in the community, were hard to match, even by several other very well-qualified applicants who were considered,” said Glen Grell, a university trustee and chair of the presidential search committee. “I want to thank the search committee members for their thoughtful and diligent work over the past four months, and Chancellor Brogan and the Board of Governors for allowing our campus search committee and the Council of Trustees to play such an important role in the selection process under the State System’s new policies governing presidential searches.”

Council of Trustees Chair Michael Schaul cited an “overwhelming consensus” among campus groups for Dr. Harpster’s selection, including the unanimous support of the Council of Trustees and the backing of university’s administrators, faculty, staff, alumni and the community. “Most important, he was the clear choice of our students,” Schaul said.

“We thank all those who participated on the search committee, including the committee support staff and, importantly, the professional support from our search firm, RPA Inc.,’’ Mr. Schaul continued. “We also greatly appreciate the interest of the high-quality candidates who sought consideration for the presidency. We greatly appreciate the support we received from Chancellor Brogan and his staff, particularly Vice Chancellor Peter Garland, during our search process. On behalf of our Ship family, we believe President Harpster is the right person, for the right job at the right time.”

Before coming to Shippensburg, Dr. Harpster spent more than a decade at the University of North Carolina at Charlotte where he served as director of student life, dean of students and assistant vice chancellor for student affairs. He began his academic career in student affairs while attending Shippensburg University as a graduate student from 1972 to 1974.

Shippensburg University of Pennsylvania was established in 1871 as the Cumberland Valley State Normal School. As a comprehensive university, it currently enrolls about 7,400 students, including more than 6,300 undergraduates. The university has 325 full-time instructional faculty and offers 100 undergraduate and 57 graduate programs. 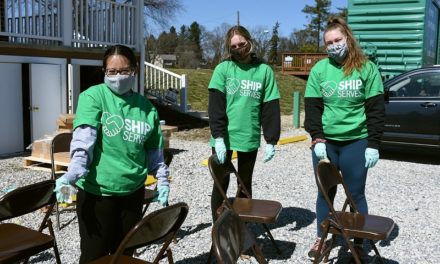