Stories of spirits at Shippensburg University 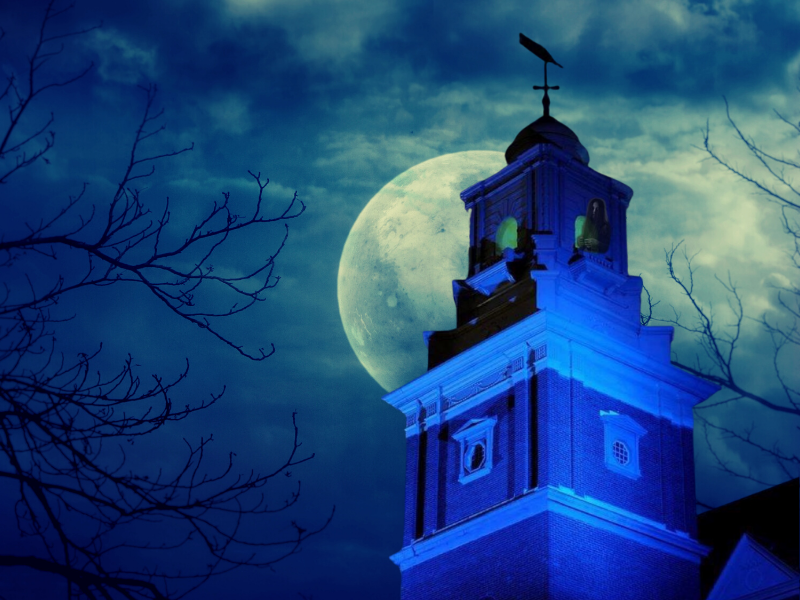 Are there spirits among us on Ship's campus? A photoshopped image suggests so.

Shippensburg University is preparing for its sesquicentennial in 2021 when the school will celebrate 150 years of history. Across the diverse range of people, places, and stories, tales of resiliency continue to be the common thread that binds the Ship family.

Perhaps that strong Ship spirit best explains why some claim to have had paranormal encounters around campus. From creepy to downright terrifying, alumni, students, faculty, and staff have been experiencing unexplained events for years.

Are the resilient, lingering souls of Ship’s past haunting campus?

Gather ‘round to read some of the real reported incidences to decide for yourself… if you dare.

We had decorated our door for the Christmas hall decorating contest, using tin foil. During this time of dormitory regulations, males were not allowed in a female dorm unless escorted, but there was a curfew when no males were allowed in the building. Most of these events occurred after curfew period, so what we thought at first could be a prank by some boy, like the panty raids, there became too many pranks by what I now think was a poltergeist because the pranks were more devilish than evil.

We both were sitting at our desk and we heard the doorknob turn and the tinfoil rattle. Because my desk was closer, I opened the door and no one was there. Before I sat down, it happen again; again no one was there. I then was determined to catch the culprit and I put my hand on the doorknob so that as soon as it turned, I would open it and catch him. Again I opened a door to no one.

We had decorated a small Christmas tree, and we would find the ornaments hidden at places not conducive to a fallen ornament to naturally land…and some would be missing for days and then reappear. The tree lights would mysteriously be shining after we each swore “it wasn’t I!! ”

Then our alarm clocks would be set and ring at 3 AM.

My roommate and I were serious students, having parents who were not able to attend college. We were not party girls so none of this was drug or alcohol induced. We also had promised our parents to be safe by always locking our door, so no one could have messed with these objects when the room was vacant. This incident has been in the vault until now because it sounds lewd and crass but it really occurred and definitely made us believers that something was going on.

During this mischievous time, my roommate and I would find the stitching in the “lap” area of our bell bottoms or pants suits having been ripped out like what a seam ripper does. We had to sew at least a dozen pairs.When we left for home at Christmas, we called our ghost Hermann, and told him although he was fun, we wanted him to be gone when we came back for next session and he was!

Tessa, alumna/Fall 2006
Naugle Hall
There were so many paranormal incidents in Naugle Hall but the one that takes the cake is when the shower turned on in the bathroom. Not only was I the only person in there, it was summertime and I was an RA so I was the only person on the FLOOR.

Stephanie, alumna/ Spring 2017
Naugle Hall
My roommate and I would hear knocking inside our closet and we would both occasionally wake up with scratches.

Cindy, staff/ Summer 2015
Old Main
Back in 2015, I had been working an alternate summer shift starting at 6:00 AM digitally cataloging Hall of Fame files for the Sports Information office in Old Main. I would be alone in the office until 8:00 AM. There were times during those early hours when I could just sense a fleeting extra presence or energy in the place, a feeling as if one was not alone.

One morning I entered the back room where all the sports information related file cabinets, gear, and electronic equipment was stored. This is a small room with a door that was known to occasionally open on its own. I always went in there with trepidation.

As I entered the room and walked past a field printer that was stowed in a plastic tub, it began to hum as if it was fired up and ready to print. I looked at it and the cord was in the tub, in no way plugged in. I smacked the top of the printer and a couple seconds later it stopped.

I have no way of knowing if this occurrence was caused by some paranormal energy or if the machine somehow picked up natural telluric currents or if there was some other reason that could be attributed to this odd incident. Either way, the printer was running without direct electrical current and it was enough to make me a little nervous and to remember it years later.

Samantha, alumna/ Fall 2011
Mowery Hall
My roommate and I were watching television in our room on the 5th floor of Mowrey when a bottle of lotion rotated 360 degrees on my roommate’s dresser. We both saw it happen and there was no logical explanation.

Later that night, we turned off the lights and TV to go to sleep for the night. About 10 minutes after we laid down for the night, the TV turned on again by itself and began switching channels. We unplugged the TV after that. Both of us believe wholeheartedly that both of these incidents were paranormal in some way.

Angie, alumna/ Spring 2015
McLean Hall 2, Room 417
My roommate and I were watching tv in the living room and she went back to her room (she never closed her closet door for easy access to shoes and such) and she called my name and I thought she wanted to gossip.

I go back to her room and she’s standing in front of her closet door which was still open but she was staring and clearly unnerved. I looked and there was a belt hanging in the arch way, gently swaying.

We were the only ones in our suite that day and night and there was no tape or glue holding the belt up, nothing at all was holding it up.

Nicole, student/ Fall 2019
Horton Hall
It’s common for me to sit at a certain desk in Horton on the third floor and study. On this night I had to print out something before I left the campus. So I started packing up my stuff to head to Dauphin Humanities Center around 7 pm. After I have all my stuff packed I started walking down the set of stairs beside the elevator in Horton.

As I’m walking down the stairs I heard someone say “You forgot something”. I turned around and said “Hold on I’m coming back to get it”. I get back up to third floor and there is nothing on the desk as well no one else up there. I start going down the stairs again and right as I hit the second floor I distinctly hear a woman’s voice say “You forgot me don’t leave me here alone”.

I never saw anyone which confirmed that no one else was in there even after I reached the first floor where the woman’s center is. After that I bolted out of there to DHC I still study up there but not as late anymore.

Casey, alumna/ Spring 2019
Memorial Auditorium
There’s a couple of spirits that haunt Memorial Auditorium – the regular ghost, Tina, whom we believe to be a young student who took her life years and years ago in the theatre, and one named Frank that was a former technical crew member.

Tina can be heard rattling doors, knocking items over, and moving things when students are in the building late at night for rehearsal, strike, and sometimes class-related activities for Paris Peet’s theatre classes.

Frank is speculated to bother MA owner Elizabeth Yoder when she works in the building late at night. Members of Act V came to know Tina and Frank while spending so much time in MA, have come to enjoy their presence, and we’ve been known to chat with them on occasion. I think the techs may put out the ghost light for them as well.

Have you had an unexplained experience or what you believe is a paranormal encounter at Shippensburg University? COMPLETE FORM HERE